Up the Lagan in a bubble! 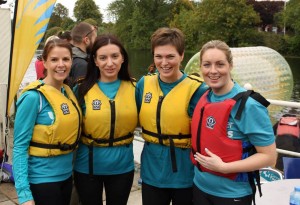 No-one would normally accuse our adviser, Emma Greer, of having “come up the Lagan in a bubble”, but at the weekend she did just that!

If you were anywhere near Cutters Wharf on Saturday you would have seen two giant inflatable zorbs bobbing about on the river, for an event arranged by Cancer Focus NI. This is the first time they have run this event, but hopefully won’t be the last, as a great time was had by all!

Although Emma’s team didn’t win (it was much harder than it looks!) they helped Cancer Focus NI to raise over £5,000, all money which will be spent to help cancer sufferers and their families in Northern Ireland.

Emma will also be running the New York marathon on 1 November 2015 for Cancer Focus, and donations would be gratefully received at www.virginmoneygiving.com/nyc4cancerfocus.