US Election – what happens next? 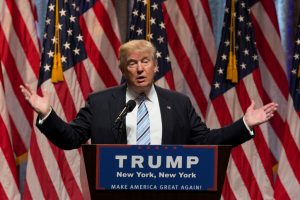 After months of increasingly controversial and bitter campaigning, the 2016 US Presidential Election reached a dramatic climax, culminating in a surprise victory for Republican Party candidate Donald Trump. The Republican Party retained control of the US Senate and the House of Representatives.

Generally, investors had been expecting a narrow victory for Democratic Party candidate Hillary Clinton; therefore, Trump’s unexpected victory threw markets off balance. The price of oil fell and equity indices dropped in response to the news that Trump was the new President-elect, although their fall was generally less pronounced than it was in the wake of the Brexit vote in June. In contrast, demand for perceived “safe-haven” assets surged; the price of the US ten-year Treasury bond rose, and demand for gold jumped sharply. Meanwhile, the US dollar plummeted against “safe-haven” currencies including the Japanese yen and the Swiss franc. Mr Trump’s victory could also raise questions over the likelihood that Federal Reserve (Fed) policymakers will implement an expected increase in interest rates at their next meeting in December.

Mounting uncertainty surrounding the possible outcome of the election has undermined investor confidence in recent months. While Clinton was widely regarded as a candidate who would generally uphold the status quo, Trump is more of an unknown quantity. Looking ahead, as the world heads further into uncharted territory, many investors are likely to adopt a “wait-and-see” approach until they have more idea of the Trump administration’s future plans.