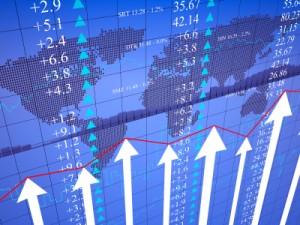 Against a backdrop of scare-mongering and negative press, it is easy to forget the main reason for investing – the potential to substantially grow your money.

Of course it is possible for the value of your investment to fall, especially in the short-term, but over the longer term markets do rise as well. The average moderate risk multi-asset fund (IMA Mixed Investment 40%-85% shares sector) has returned a healthy 10.2% over the past year and 23.5% over the past 5 years – a period which included the banking crisis in late 2008/early 2009.

In the same 5 year period any form of bank account would have been almost guaranteed to lose money in real terms due to low interest rates and high inflation. Inflation (CPI) has remained at 2.7% for the last 4 months and the Bank of England expects this figure to rise to at least 3% by the summer and to remain above its 2% target for a further two years.

Having expanded during the third quarter of 2012, the UK economy shrank by 0.3% during the final three months of the year. The news raises the prospect of the UK falling back into a triple-dip recession if the economy shrinks in the first quarter of 2013. The Confederation of British Industry anticipates “fairly flat” growth for the remainder of the winter, after which activity is expected to pick up. Meanwhile new figures from the Office for National Statistics showed the UK unemployment total fell by 14,000 between October and December to 2.5 million.

The Bank of England maintained interest rates at 0.5% for another month during January and interest rates have remained at this record low since March 2009. The Monetary Policy Committee opted not to extend the bank’s programme of quantitative easing (QE) measures, although three of the nine members were in favour, including Bank of England governor Sir Mervyn King.

The Bank of England’s Credit Conditions Survey reported an increase in lending activity during the fourth quarter of 2012 that is likely to continue into the first quarter of 2013. This recovery has been attributed in part to the Bank’s Funding for Lending Scheme. Under the terms of the scheme, the UK’s central bank has made funds available to the country’s banks and building societies to enable them to offer cheap loans to non-financial companies and individuals.

The Royal Institution of Chartered Surveyors reported an increase in house sales for a fourth consecutive month during January and commented: “It is still very early days to talk about a comprehensive market recovery but activity levels are still encouraging and there is some optimism out there that things could continue to improve.” UK house prices climbed by 3.3% during 2012, according to the Office for National Statistics, although much of the rise was caused by a strong increase in property prices in London and the south-east of England.

Moody’s recent downgrade of the UK sovereign credit rating from AAA to Aa1 does not seem to have bothered the markets, although sterling fell to its weakest level since July 2011 against a basket of major currencies. The downgrade reflects the weak outlook for the UK economy and concerns over continued austerity measures, however as the move was widely expected the impact on the markets was negligible. A similar downgrade for the US in August 2011 barely registered, and the only major economies to still hold the top rating are now Germany and Canada.

The US recovery has been gaining momentum since last summer, with jobs growth accelerating and the housing market turning the corner. The fiscal cliff, which could have pushed the US back into recession, was averted at the last minute, although some key decisions were postponed until the end of February and could still have a major impact.

China’s economic growth gathered momentum during the fourth quarter of 2012, expanding at a quarterly rate of 7.9% during the final three months of last year, compared with 7.4% during the third quarter. The country’s economy had suffered from a drop in overseas demand as western nations have struggled with their own economic woes but the authorities have taken significant steps to boost domestic consumption and reduce dependence on external demand.

The other “BRIC” economies – Brazil, Russia and India have had mixed fortunes so far this year. Investors still need to be convinced the Indian economy is on track and January was an unimpressive month for the Sensex. The IMF has warned that India has to stop cutting interest rates and somehow find a different way of generating growth.

In Brazil the Bovespa has had a terrible time, already falling some 9.4% this year amid concerns that inflation will curb growth.

Russia had a good January, making up for an underperformance last year, and there is some hope there will be a spate of privatisations in the wake of President Putin’s declaration that more state firms should be privatised. The Moscow stock exchange is setting an example, planning to float itself on itself, raising some $500m (£315m) to upgrade its facilities and so encourage others to follow suit.

The International Monetary Fund (IMF) expects global growth to pick up during 2013 but believes much of that will be growth driven by the emerging economies. In total this year, the organisation expects advanced economies to grow 1.4%, whereas emerging and developing markets are expected to expand 5.5%. Markets tipped to do well in 2013 include the Philippines, Thailand, Turkey and Pakistan.